With a strong academic background and a proven expertise in attitude research, The Kitchens Group is able to identify those messages most effective in influencing the public’s behavior. The Kitchens Group developed methods of measuring the effects of the religious belief systems, subconscious gender and racial biases, and the psychological cross-pressures between economic and environmental concerns of the public.

Dr. Jim Kitchens served as pollster and message consultant for Governor John Bel Edwards campaign. John Bel Edwards election was called the biggest upset in Louisiana political history by the Baton Rouge Advocate. It is the first time in modern Southern politics that a candidate elevated himself from the State House of Representatives to the Governorship. 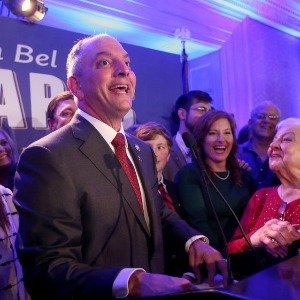 Click here to order The Four Pillars of Politics: Why Some Don't Win and Others Can't Lead
written by Dr. James Kitchens and Dr. Larry Powell

The Four Pillars of Politics: Why Some Don't Win and Others Can't Lead
has been critically acclaimed as one of the original ideas and new works about American politics. The book explores the major appeals that move American voters to support a candidate and the problems with leading a country that is ideologically separated.