The traditional methodology of telephone-based market research is no longer a viable option. Pew Research reports 33% of American households no longer have landlines, and another 25% of the households have landlines which are never answered. Today, 80% of Americans are online at least once a day. The fastest growing segment of Internet users is people over the age of 65.

Commercial Market Researchers Have Used the Methodology for a Decade

Throughout the last decade, market researchers have been gathering email addresses, which are used to invite people to participate in surveys. The process is based upon game theory where people are invited to join a research group and told they will be rewarded for their participation, much like the airlines’ frequent flier programs. People volunteering to take surveys are known as a “research panel”. These groups, however, are never static. New members are constantly recruited and the number of potential respondents increased.

Many of the research panels are aimed at specific segments of the population based on the customers served by the company. For example, Walmart has a research panel known as the “Walmart Mommies” comprised of women who shop at Wal-Mart at least twice a month and have children living at home. Companies and institutions such as AT&T, Career Builders, and Harvard University have built their own research panels.

The Kitchens Group has been executing Internet surveys since the latter part of 2010. We began with several of our commercial clients with studies in Virginia, Florida, and Arizona. In 2011, The Kitchens Group executed two national polls using the Internet methodology. One survey was for the American Wetland Foundation to test attitudes about the restoration of the coastline of the Gulf of Mexico. The data confirmed people in all areas of the country understood the importance of coastal restoration. This study was used to lobby the U.S. Congress.

Dr. Jim Kitchens served as pollster and message consultant for Governor John Bel Edwards campaign. John Bel Edwards election was called the biggest upset in Louisiana political history by the Baton Rouge Advocate. It is the first time in modern Southern politics that a candidate elevated himself from the State House of Representatives to the Governorship.

Click here to order The Four Pillars of Politics: Why Some Don't Win and Others Can't Lead
written by Dr. James Kitchens and Dr. Larry Powell 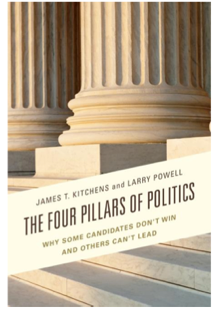 The Four Pillars of Politics: Why Some Don't Win and Others Can't Lead
has been critically acclaimed as one of the original ideas and new works about American politics. The book explores the major appeals that move American voters to support a candidate and the problems with leading a country that is ideologically separated.